“The Sacred Ground Historical Reclamation Project has participated in UNAC conferences since the coalition began in 2010. Presenting updates on a local struggle at these national gatherings of social justice activists has been a very good way to find others engaged in similar struggles. We find allies and strengthen our networks. We bring what we learn from the conference back to our community and these connections strengthen all our efforts during the intervening years.“ - Ana Edwards, Chair, Sacred Ground Historical Reclamation Project of the Virginia Defenders for Freedom, Justice & Equality

"Today we are living in a new era of war and occupation. Beginning with the U.S. invasion of Afghanistan in 2001, this era is characterized by escalating brutality and destruction waged by the U.S. government and its allies on people abroad and increasing attacks against people at home. It is now more important than ever before that we unite across borders to build a stronger and more effective antiwar movement. The UNAC conference is providing this opportunity for all of us!" - Tamara Hansen, Mobilization Against War and Occupation (MAWO), Vancouver, Canada

‘Until the philosophy which holds one race superior and another inferior is finally and permanently discredited and abandoned, everywhere is war.’ (Bob Marley) As we continue the fight against imperialist wars and all forms of repression, we must redouble our efforts and solidify our resistance. Coming to the Capital of the Confederacy for the UNAC conference will provide those of us who dare to struggle with yet another opportunity to develop more effective fight-back strategies to ensure victory. We stand with the sufferers all across the globe and must send a strong message to the newly elected despots that we will, in the words of Medgar Evers, “Never Let Up!” - Jaribu Hill, Mississippi Workers' Center for Human Rights & the Southern Human Rights Organizers' Conference

“The threat of war abroad never abates. The mass incarceration state doesn’t shrink. The two-party duopoly embraces the 1% and leaves working people to fend for themselves. We can resist these threats when we act in solidarity with one another. That is why the UNAC 2017 conference is so crucial. Join us in Richmond!” - Margaret Kimberley, Editor & Senior Columnist, Black Agenda Report

“Resistance to Trump and fascism necessitates strengthening our overall resistance to U.S.-led war and militarism. The U.S. economy continues to be a war economy, dependent not only on endless imperialist wars of aggression and militarism abroad but war and militarism here in our own backyard. We see this in the militarization of the police and law enforcement against the poor, people of color and immigrants, as well as mass incarceration. Now is the most urgent time to strengthen the antiwar movement as one that is more comprehensive in its view of unjust wars in all its forms, one that takes a definitive stand against imperialism as the main enemy of the people.” - Bernadette Ellorin, Chairperson, BAYAN USA - Bagong Alyansang Makabayan (New Patriotic Alliance)

“There is nothing more badly needed now than a cross-issue, cross-border movement, independent of partisanship, organizing strategic nonviolent action to replace racism, militarism and extreme materialism with respect, diplomacy and sustainable economics. If it succeeds, I'll want to be able to say I was where it was being organized. I'll see you in Richmond!” - David Swanson, Director, World Beyond War

“As the U.S. military budget increases and the U.S. escalates the development of nuclear weapons, the need for bringing those who oppose war together becomes urgent. ‘Stop the Wars at Home & Abroad: Building a Movement Against War, Injustice & Repression!’ not only focuses our attention and unites in opposition to U.S. militarism but also against the injustices at home: police brutality, mistreatment of immigrants and much more. Out of this conference will come a stronger mass movement, something desperately needed today.” - Kevin Zeese, Organizer, Popular Resistance

The United National Antiwar Coalition
is a national coalition of organizations that fight against wars at home and abroad. 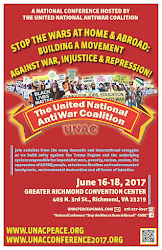 PDF Posters and Flyers for Printing